Would you like to visit the local site ()?
Yes please

Black is one of the most frequently used colours in printing. But, contrary to what you may think, not all black inks are the same. In both black and white printing and full colour CMYK printing, black ink can change dramatically. In printing, there are two types of black: standard black and rich black.

Standard black consists of black ink (100% K) and nothing else, while rich black also contains Cyan, Magenta, and Yellow. By adding the other colours, you can get a deeper and more saturated tone.

On computer screens, the two tones may appear the same – but this definitely won’t happen on paper. To ensure consistency, make sure you check the values for each colour. If you look carefully at the illustration, you can see what the two different blacks will look like when printed.

When not to use rich black

Even if you have a full colour CMYK project, always avoid rich black for small text, line art, or anything with very fine lines. The reason? Microscopic variations in plate registration can produce blurry remnants of the four colours around the edges, a phenomenon called ‘ghosting’. It’s not unusual to see this effect in newspaper print.

Here is an example of ghosting, where the thin text and black background is set up as CMYK profiles (rich black) instead of greyscale (standard black). You see, to produce rich black, four separate ink plates distribute ink on top of each other. When just one of these plates is even the slightest bit off, you will get this ghosting effect.

In the image shown here, we can clearly see that the magenta plate isn’t aligned with the others. When dealing with thin lines such as these, standard black is the best choice because it only applies one ink plate rather than four. 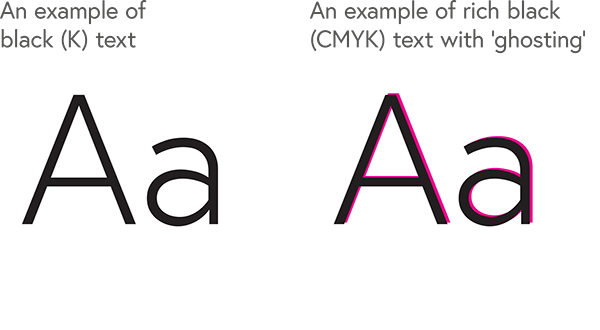 Ready to get started?
Let's go!

Seeing (and feeling) is believing

Sign up to our newsletter for the latest offers, products and inspiration